Our biggest play session thus far has been Labor Day weekend. We had three new toys arrive that week. A purple blindfold, purple cuffs with chains, and a suede flogger. We had tried out the blindfold and cuffs but had not really tested the flogger. This was a weekend of many firsts for us.

After Sir came into the bedroom he tried out the flogger. I had one moment I nearly screamed safeword on, the flogger wrapped between my legs and on my pussy. That I was NOT prepared for! Next Sir held me down on the bed and forced me to orgasm repeatedly. I do remember almost biting his hand at one point as he went to muffle me. Sir then fucked me from behind, oh how I love that position cause his balls slap up against my clit, while grabbing my hair. I was pretty worn out (wonder why?!). I slept very soundly that night!

Boy was I right!

Until Next Time... Play Rough!
Posted by PaperMirai at 6:58 PM No comments:

2) Sir came twice in a row two nights in a row.

4) Let Sir come on my face for the first time.

Thoughts Racing Through My Head

The last four months have been absolute bliss. We've gone from going weeks, months even, of not having sex to doing *something* nearly every day. I look forward to going to bed, and try to wrangle Sir into mid-day stuff constantly. I. Want. More.

Until about a week ago. Right after Labor Day Weekend (LDW). We had a fun and busy weekend. Or so I thought. Sir has stopped tweeting/texting me just to say Good Morning and that he loves me. Our Play last Friday, the first one after LDW, felt like something was missing. I did a lot of new things over LDW, he came on my face, I initiated anal for the first time (a story unto itself for another day). Something has changed since then. Sir no longer melts when I give him my subbie adoring/worshiping look. He's stopped asking what I've accomplished that day to earn my reward spankings. Did I do too much at once? Fulfilled too many fantasies already? I want my Sir back. What can I do to help Sir? How do I get my Sir back? What did I do? Is Sir bored with me?
Posted by PaperMirai at 2:17 PM No comments:

My collar is not one most would imagine. It is purple and has a butterfly dangling from it. AP gave it to me on my birthday in July. We refer to it has a "Wedding Necklace" to outsiders as it replaces a wedding ring I haven't been able to wear in years due to my hands. Yes, that is me in the picture with my hands around my neck and the necklace over them. 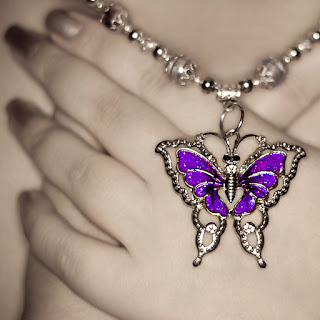 I've had this post in my head for a few days. To be honest my hands are killing me today and the last thing I want to do is type. On the other hand I'm afraid that if I don't get it typed out I will forget it. I'm going to pop another pain pill and hope this makes sense!


As my few readers are aware AP and I are just starting our exploration into the kink side. I may, admittedly, be moving a little faster then Sir would like. We all have our hangups. Apparently once I got past mine I waved goodbye and embraced the new me. I have few hangups left. Only two actually.
Calling Sir "Daddy" and paddle spanking.
The Daddy one stems from being molested by my biological father until I was 8 years old and the state of Kansas finally terminated his parental rights. Not to mention the molesting done to me while in foster care. Understandable, right? What about the paddle spanking, you ask? Well, as luck would have it I was adopted into a fine ultra-conservative Nazarene family. The following sums up the Nazarene faith: No drinking, no smoking, no dancing, no gays, no going to the movies (but you can rent it and watch it at home), corporal punishment (spare the rod spoil the child), must go to church no less then three times a week (not really a rule but it should be seeing as I spent most of my childhood/teendom at church), Father always knows best (even though Mother is really in control), children should be seen and not heard (even after grown and moved out). Pretty much any conservative running for president currently. Is it any wonder I turned my back on it? My Mother would paddle us with a bread board. She broke it once. On. My. Ass. She also cured me of sticking my hands back there to protect my butt. My brother would laugh at her. Yes, my biological brother and I were adopted into the same family and it was all my fault. I spent a lot of time in my room. Alone. I taught myself to crochet and sew. I was a voluptuous reader. I rarely watched t.v., still don't. That's what happens when you spend six months or more grounded from it at a time. You. Just. Don't. Care. Anymore.
My point? Right... I warned you I was taking pain meds. Anywho...
Reward versus Punishment. I've not been in the BDSM community long but I have gathered one thing thus far. Pain is punishment. Pain is bad. Spanking is something done to someone who's been bad. BUT I DON'T WANT TO BE BAD!! *cough* All I want to do is make Sir (although I prefer to call him Dommy) happy. Why would I want to make him mad in order to be spanked for punishment? I'm not trying to be radical or change BDSM but this is probably why some say we aren't doing kink right. I'm in pain every day. On a scale of 1-10 I live in the 4-6 range daily. Right now it's around 8-10 even with pain meds. Making something else hurt makes me forget about my hands. The 'ole reverse psychology bit. Let's make my ass hurt to make me forget about my hands. Oh, and orgasms? I love sex endorphins! They take ALL my pain for a little bit. A spanking/flogging from Sir is my reward for a job done well. For being good. For completing my tasks. For being a good subbie. Sir also likes to see me squirm. We both get something out of it. So we aren't doing BDSM like "normal" (HA!) folks. This is our choice. Being given a spanking has always had negative connotations for me. I don't want my relationship with Sir to have a negative undertone. I want it to be happy.
I love the way Sir caresses my ass in-between floggings. Like he's trying to rub the hurt away. The touch of his smooth soft hands on my stinging ass turns me on. Sometimes he'll dribble the ends of the flogger over my ass. The soft suede kisses me silently. For me it is the stark contrast between pain and softness.
It takes me away from my constant pain.
It is my happy place.
Posted by PaperMirai at 6:27 PM 2 comments:

Who knew that my submissive side ran deep? That I had been hinting at it for years?

I've known my husband since I was 14. We've been married nearly 18 years now.

I have a very outgoing personality. I've been called an extreme extrovert. I don't know strangers, they're just friends I haven't met yet. In real life I'm an advocate for those with the same genetic condition as me (I won't expand here has it is rare & makes me somewhat identifiable, which I wish to remain anonymous at this time), I write for several blogs about this genetic condition to bring awareness. I've an Associates and Bachelors degrees. I'm smart. Intelligent in fact. I have to be domineering and in control at work.

Yet, a text from AP and my subby side kicks in.

I would do anything for AP. Just to make him happy. Making him happy makes me happy. Sappy I know. But it is a love that includes four very important elements.

He has them all. Always has. Always will.

PaperMirai
The future of my life is formed from new paper each day. Married to, hopelessly in love with, and expanding my submissive side with @apangdon.

PM: Me.
AP: My husband.
Other people will be added here as needed.